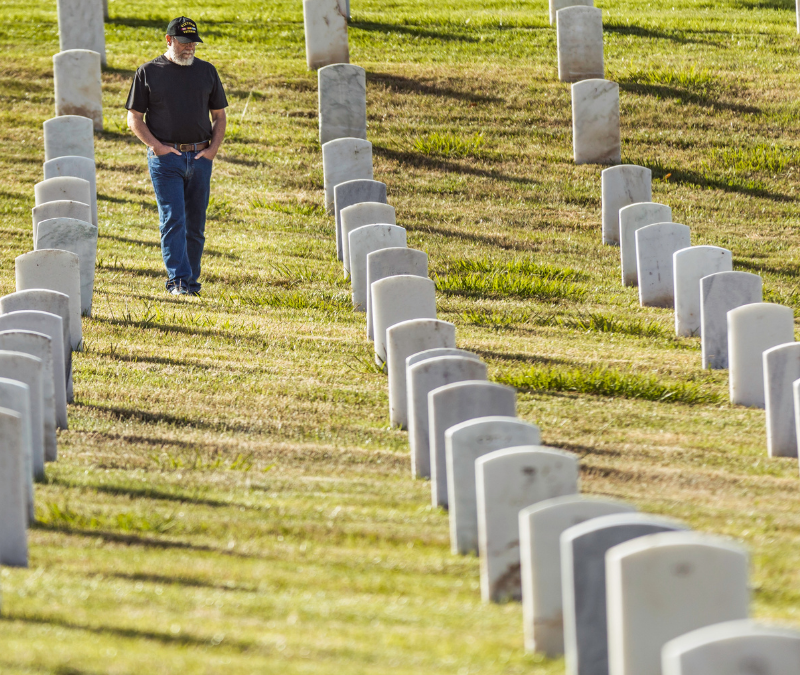 Seventy-three-year-old Jack Klamm moved from Colorado to Redmond, Oregon, a little more than a decade ago to be closer to his sister.

Jack has Parkinson’s disease — “a gift to me from Agent Orange,” says Jack, who’s a Vietnam veteran who served in the Navy — and he can’t fully take care of himself at times. So, his sister offered to help him when he needed it.

However, his sister has since moved away, which was likely part of the reason Hospice of Redmond came knocking on his door a few years ago.

“Somebody came to my door one day and said, ‘Hi. I’m from Hospice Transitions. My doctor recommended I enroll you,’” Jack said. “When she said hospice, I thought, ‘How come nobody’s told me about this?’ I thought I was dying.”

However, the Transitions program is a program of Hospice of Redmond’s that isn’t built around end-of-life care. Its goal is to offer enhanced quality of life for people who need it – friends, neighbors, and loved ones who are experiencing mental, physical, and emotional changes due to a life-limiting illness.

For Jack, this has included regular visits to his home (and phone calls during the pandemic) and ensures he has access to resources and tools necessary to keep his body and brain active through Parkinson’s evolution.

“Over the last four years or so, mostly they just come over and visit for a while, which is always nice,” Jack said. “They give you the feeling that someone really cares. It’s just a nice, comforting thought.”

What is the Hospice Transitions Program?

Transitions exists for those with life-limiting illnesses that affect their physical, mental, or emotional well-being. At no charge, Transitions Coordinator, Kayla Bucholz, offers patients solutions to enhance their quality of life. The program allows patients to maintain the autonomy to choose which suggestions may be most beneficial to them.

For Jack, he said he mostly appreciates that someone always has his back through the Transitions program. He loves the personal connections he’s made during his regular visits with caseworkers, and Transitions has helped ensure he has the tools he needs to live an active, mobile life at home.

“They’ve gotten me a walker and two or three other things to help me with my mobility,” he said. “They also got me one of those grippers, so I don’t have to bend over to pick stuff up off the floor.”

The Transitions team also helped him navigate through the VA system when he needed emergency dental work. A couple of teeth were giving him so much pain that he was unable to eat, which was causing him to quickly lose weight.

Kayla, the Transitions Coordinator, was able to make some calls that secured an emergency referral for Jack from the VA.

“Navigating the VA system can be difficult,” Kayla said. “Many times I see people give up. Add in an illness such as Parkinson’s or dementia, and it just creates additional stress on my clients and they quickly become lost.”

But, with a few phone calls to the VA and some community contacts, Kayla was able to light a fire, so to speak, to get his claim approved and appointments scheduled to get his dental work with a community partner.

Because he joined the Navy at the young age of 17, Jack didn’t complete high school. But, thanks to an anonymous nomination, Jack was selected to receive an honorary high school diploma from Ridgeview High School this year during its graduation ceremonies.

It’s an annual Ridgeview High School tradition to give an honorary diploma to a local veteran. For Jack, the gesture is far more than simply symbolic.

“Oh, man … I gave up on my high school diploma when I was 17, and I didn’t think I’d see [an opportunity] again,” he said. “It really pumps me up. I think it’s going to be a great day. Whoever nominated me, I’m very grateful to them.”

Jack said over the past few years, he’s considered moving back to Colorado to be once again closer to his sister. But, when he thinks about what he’d be giving up, he doesn’t believe he can make the move.

“Hospice and the VA doctor are the big things keeping me from moving back,” he said. “The last few years since I’ve been in the Transitions program – the last four years of my life – have been life-changing. I don’t even have the words. It’s just given me a better attitude, and I’ve gotten more positive about my life. I really love them. They’ve always been just great.”

To learn more about Hospice of Redmond’s Transitions program, visit the webpage or call us at 541-548-7483.