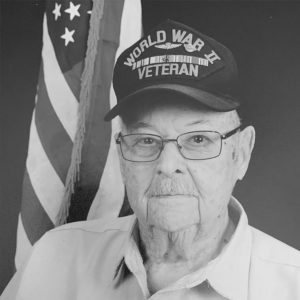 “A life of service”

I’ve lived a long, full life, one with many twists and turns but I wouldn’t change a thing. I was born in Kennett, Missouri July 14, 1926 to a mom who worked in a shirt factory and got a nickel for every shirt she ironed and a dad who was a logger. At 15 I moved to Alabama where I worked machinist and welder jobs, attending the National Youth Association (NYA) Finishing school outside of Mobile. The skills I gained from that school allowed me to work in a shipyard until 1942 when I decided to move to Phoenix, Arizona. I moved around a lot as a kid, you don’t find many kids nowadays who will just up and move on their own and figure out a way to survive.

In Phoenix I was the assistant manager at a movie theatre… you could say I was a bit of a Renaissance man with my skill set growing up. I decided to join the Marine Corps when I turned 17, and at that time my parents had to sign all my papers and give me permission, which they did, and I was shipped off to bootcamp. I wanted to go into tanks, but they made me a paratrooper. Who in their right mind jumps out of a good aircraft? I worked rigging parachutes and packed those chutes for the officers on the planes. They had me doing all sorts of jobs, I’d stand guard if I needed to. I did any job they asked me. I was a Marine first, and technician second. I was shipped off during World War II to the Marshall Islands where I stood a lot of guard duty and handled rigging lots of silk parachutes for the guys jumping.   I will never forget May 18, 1945. I was assisting on the ship with loading ammunition on the starboard side when a Japanese kamikaze airplane fell out of the sky on fire and hit nearly where we were standing on the ship. It felt like I could reach up and touch it, I could feel the heat.

After our stint at the Marshall Islands we were sent to Okinawa and there the Marine Corps used me as a regular grunt; we were the second wave into Naja, Okinawa with the 6th Marine Regiment. We were sent in for the occupation of Japan and returned to the states in December of 1945. I thought I was done with deploying, when they sent me to China in 1946 where I again worked as a rigger and stayed in China for 2 years. It was in 1948 when I got back to the United States that I got out of the Marine Corps as a Sergeant and decided to join the Army Air Corps. I started off as an airplane mechanic, then became a fire chief where I was training firefighters how to put out fires on aircraft. During that time, I was stationed at Kelly Field in East Texas. Many people may not know, but the Army Air Corps transitioned into the Air Force in November 1949, but nothing changed for me, I continued to do the same job but by then I could say I’d served in three different branches of the military.

The military taught me countless skills. I never could have imagined the skills I learned, I even learned printing and electronics, was responsible for printing plants in Alabama and Alaska supporting our airmen. They decided to change my job again and I was sent to Denver, Colorado to work ‘Bomb Navigation’ electronics for Air Force B-52s. My last assignment in the service was in Washington state, where I retired as a Level 7 Master Sergeant after 30 years serving in three different branches. During my time, one of the most valuable lessons I learned from serving was that you always put your men first, no matter what. Brother first. I took that with me for the rest of my life.