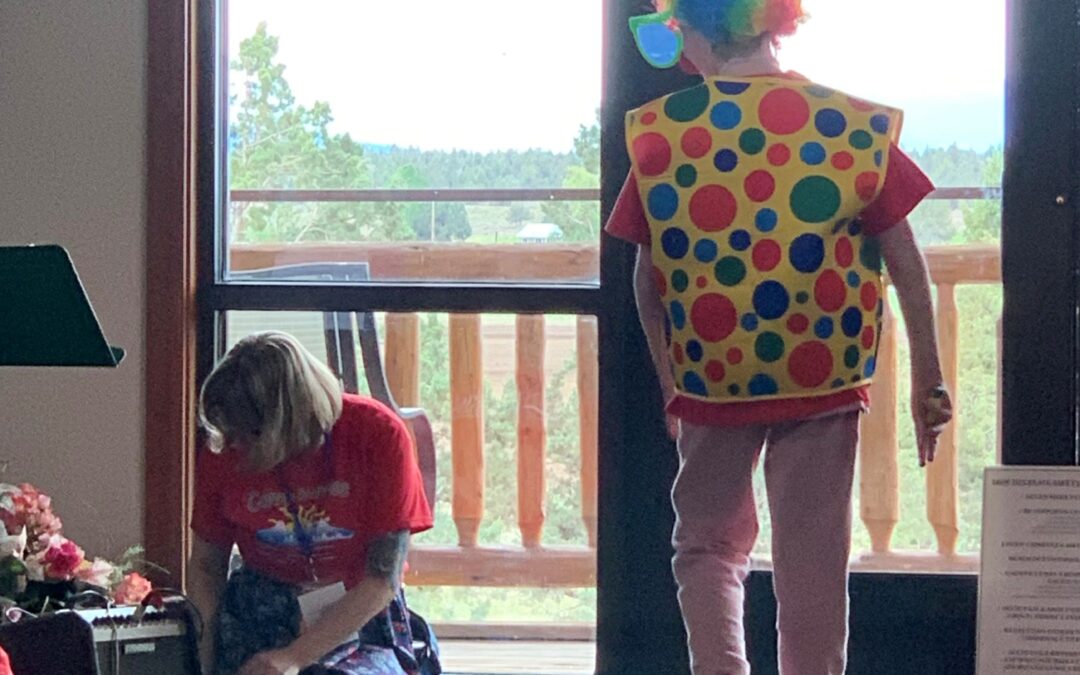 The phrase, “I want to come back again next weekend,” is music to the ears of outgoing Bereavement Coordinator Diane Kellstrom and her newly appointed replacement, Kat Rachman.

“We were initially concerned that the kids wouldn’t open up without the overnights,” said Kat. “But they did. They connected with the other children and counselors, and it was a huge success.”

Founded in 1998, Camp Sunrise is considered one of the finest children’s grief camps and is the longest-running in Oregon. Camp Sunrise is offered to children ages 7 through 14 who reside in Central Oregon and have experienced the loss of a loved one. Just under 80 percent of this year’s campers lost a parent.

A lot of preparation goes into each year’s event to make it a success. The event is led by two camp facilitators, who guide the kids through the activities with the support of an extensive team of volunteers and staff. While many volunteers have been involved in the camp for years, extensive training is required to ensure everyone is prepared for the emotions that may come up as the kids move through the different activities.

The day’s lineup included the most powerful activities from the three-day camp’s schedule to make the most of their time.

“We included the most sensitive and therapeutic activities to let kids open up and process their emotions while providing ample time to wrap them up in comfort and love before sending them home,” said Diane.

Upon arriving, each child is given a quilt made by the talented members of the High Desert Quilting Group. They are also given a teddy bear, handmade pillowcases, and a small wooden doll that kids can hang on their backpacks to remember the loved one they lost. Each item was handcrafted by generous community members specifically for Camp Sunrise.

“Some of our older kids experienced new losses, which allowed them to return to the Camp,” said Diane. “At first, they may have questioned whether they were too old or would have the same experience they had in the past. But those feelings quickly disappeared, and they benefited just as much as the other children in attendance.”

The returning campers led the charge and helped the first-time campers feel comfortable with sharing.

Grief can change a person – especially a child.

Camp Sunrise is designed to allow children to support one another, so they know they aren’t alone. The passing of tissues, the supportive hand on a shoulder, and the knowing look as they gaze into each other’s eyes and share their feelings, says volumes.

“Watching the children come together and help the other children who may feel isolated and alone is a beautiful experience,” said Diane. “Often, these children don’t know anyone who has had a significant death in their life, and they don’t know how to be the person they used to be.”

Kat’s stepdaughter attended the camp this year to process the loss of her stepbrother, Kat’s son. Her daughter’s favorite activity was making a Power Stick, which each child decorates as a remembrance of the lost person. Each feather, bead, and trinket is as unique as the person for whom it is created.

“As a mother, I stepped outside to look at the first power sticks that the kids created and could recognize the one my stepdaughter made by the things she placed on it,” said Kat. “It was a beautiful and healing thing for me, too, as Camp Sunrise aligned with the fourth anniversary of my son’s death.”

At the end of this year’s ten-hour-long camp, everyone enjoyed s’mores by the campfire, and the kids were asked to share their impressions of the camp. The overwhelming response was that they loved it and that it was one of the best things they’ve ever experienced.

But the positive experiences weren’t limited to the children who attended.

“There’s not a single person who volunteered that isn’t affected,” said Kat. “The camp is powerful and healing on so many levels. It is designed to be right for the individual – creating a safe space to process and share their harder and heavier feelings. Seeing that they had fun and observing the joy on their faces profoundly impacts the adults too.”